Meticulously identifying what they have changed from our current Social Principles took some time, as the GBCS has not, in any public place I have seen, highlighted what specific parts it is trying to change.

While our current Social Principles are far from perfect, it is striking to see how bold the GBCS is in changing and replacing the values of numerous sections, often showing little to no deference to the communal wisdom of how previous General Conferences have established the language of our present Social Principles by a much more transparent and representative process of discussion and negotiation.

I strongly encourage all concerned, theologically traditionalist United Methodists to go to the above link and register their concerns. In evaluating what sort of language and political positions I would like to see in the Social Principles, I must remember that this is an OFFICIAL teaching document for our WHOLE diverse, global denomination, and that there are different places of church law that require clergy, as well as laypeople in some leadership positions, to be loyal to these Social Principles.

So just because a certain political position reflects my own personal opinions and biases, that should not be a good enough reason for me to want to see it in the authoritative Social Principles imposed on our whole denomination. It would seem better for the Social Principles to be politically non-partisan, stick to key values that are clearly grounded in biblical teaching and Christian, Wesleyan tradition, and avoid being too one-sided over matters on which faithful Christians with an equally high view of Scripture can and do disagree.

Then it asks you, separately, if you feel the changes made in the proposed rewrite would make the section shorter, more theologically grounded, and more attuned to the concerns of the global church.

Then it asks you what parts of the rewrite spoke powerfully to you — in other words, what you liked. Then it asks you what you dislike and want to improve in this section. On the final page of the survey, you can tell the GBCS if there are other issues you feel that any new Social Principles should also address beyond those covered , and if you have any further or general thoughts.

But a lot is lost in these word cuts. I encourage any United Methodists who have concerns about any of the changes noted above to hurry to register them at www.

In other words, the liberals will be very pleased with this, and the conservatives who are the true Christians and Methodists will continue to exit, but at higher rates, should this rewrite actually be adopted. At course of study this year we were broken into groups, given 45 minutes to study a section, and then asked to comment on our section. The survey asked how we thought this reflected the values of Methodist in other countries.

I noted the people in the US could not reasonably speak for people in Africa and elsewhere. I also noted that Africans were highly under-represented on the commission that drew up the proposed changes.

Do the progressives on the commission really want to be inclusive, or do they think they know better what the Africans need than the Africans.

Your Response Needed on Proposed Rewrite of UMC Social Principles!

To me it smacks of racism. Here is a resolution for GC All UMC boards must have proportional representation from all conferences worldwide. Some people might find that scary, I find it to be a reflection of the makeup of Heaven. And also, rewrite it in the language of ordinary, everyday people.

Does anyone even read these Social Principles? Just get rid of it all together, reduce the bloated size of the BOD, actually seek to follow it, enforce, and get on with mission. I would agree with Josh that the Social Principles should be removed from the Book of Discipline since they are not church law. But, if the total word count has gone from 13, to 14,, then it would seem to have failed in the basic mission to make them more succinct.

As John has done a good job detailing, the document is an extremely poor rewrite which includes many out-of-context and even a fake John Wesley quote!

I did a test to verify this; each section is much easier to read and much more coherent if you skip over every Scripture reference and Wesley quote. I decided not to submit comments on the document after thinking it through. So, why would I then expect this team to suddenly do a and actually care at all about comments attempting to correct the multitude of problems with their document?

It needs almost a complete rewrite, not minor markups.

If the Traditionalist plan passes at GC, the next step will be to clean house at our apostate agencies that insist on producing embarassing pseudo-Christian dreck like this document.

Once again the GBCS reveals its liberal bias. It does not speak for the majority of United Methodists and it seems to parrot every policy of the liberal left in our culture. If this rewrite passes then the Methodist Church as we know it today will be forever changed and it will not be for the better either. There will be a great exodus from the church. Nay Nay Nay!

A thousand times NAY! It is not up to the church to change to become like the masses, the church should be trying to bring the masses back to the true religion. Even the small steps we have already seen are damaging our churches and our sond and daughters. Remain strong, and the masses will join you. We had this discussion at my church in Virginia and many of the members are ready to leave the church. I am not alone when I say.. We should welcome all to our churches with the understanding of teaching from the scriptures.

People purposely living in sin need to be removed from places of leadership. As the UMC crumbles under satanic attack with the aid of their own members I call upon every Christ centered, Bible believing member to stand up and be counted! To also build a chain of Prayer vigils to call our Lord God Almighty to overthrow this evil attack and rid the UMC of these corrupted souls. Lest, we fall the same as the ancient people who ignored the Prophets warnings to return to the Lord!

Although I agree with the sentiments stated above, I suggest that comments be submitted as John implores. Otherwise the GBCS will argue that no objection equals acceptance or agreement.

That being said, I believe any rewrite should be tabled until after the GC vote. Theology is constant. Views of theology is not constant, The progressive view or liberal view changes theology to fit their changing views. The traditional view faces constant challenges but remains steady in the affirmation of scripture as the inspired Word of God. I am a Traditionalist. Remove the Board of Church and Society. Go back to the correct teachings of John Wesley and the Bible. Our church was a growing entity up until when we were joined with other more progressive organisations. I copied your article, John, and printed it, then opened the survey and also the copy of the proposed Principles. I commented but I doubt those in charge will care. 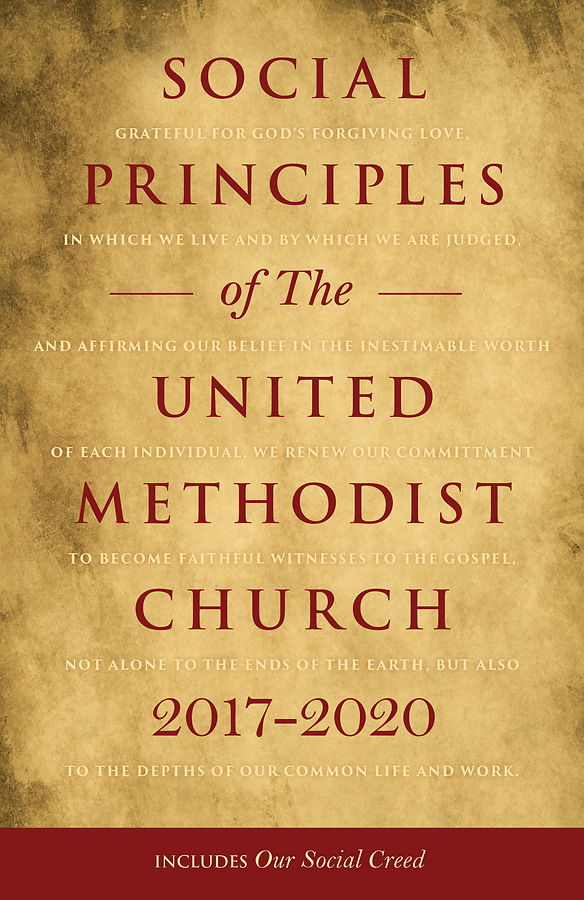 It was extremely wordy and seemed almost deliberately confusing in some parts. The progressive left will all reply in the feedback and the Methodists who are supposed to be standing up for traditional values will wake up and find it all changed.

Then the split will occur.

My heart is just broken. And they have dug for themselves cracked cisterns that can hold no water at all! I am basically appalled at this editing of our social principles.

The changes are in opposition to the basic beliefs of Christianity for thousands of years.

Here is a radical idea. Do away with the Social Principles. Social Principles on serve to divid us and distract us from focusing on making disciples. The homosexual and abortion language elsewhere could remain.

These comments have really helped me understand the revisions better. If you folks are against them in the ways and for the reasons you describe, then I am definitely for them.

It really infuriates me that my offerings go to support the work of GBCS. What a waste of time and money that could be better spent in more meaningful missions. And it infuriates me that my money goes to support the Bishops who think they rule our church and know better what is good for it. The Bishops and these boards are so out of touch with what the majority of UMC members believe, I think the only solution is to get rid of them and start fresh.

It would be a waste of time to write any of these people. I would definitely by for dissolving this board. Just saying: this hole proposal is a miss, no good for nothing.

Thank you for commenting, Henning.

The GBCS has wrapped this change in a soft black furry animal with a white stripe. It looks innocent from a distance, but once you get a hold of it, then you realized it is a skunk that will perpetually ooze rank perfume.

I am of the opinion that GBCS should have given people a revised document with tracked changes so that is easier to see what exactly they altered and whether they are addressing their 3 mandates.

They seem to be biased towards the Liberals and are not being Globally focused.

Why redefine marriage? What has changed in marriage? Why are we supporting abortion and affirming transgenderism??? I am of the opinion that this document should not be presented at the GC.

There is need to be transparent in this exercise which has and is gobbling finances and resources which could have been channeled for mission work to bring people to Christ. I know that they have gone round in Africa with the draft but after talking to a number of people who participated in the presentation, most of them did not even see that there were these undesirable changes that are not Biblical and which are not compatible with the UMC teachings.

I agree with someone who said the composition of GBCS needs looking into to for fair representation. Dear Lord help us. We have already changed too many things to accommodate others in their thinking. Time to stop. We must stand firm in the word of God. The Bible is true and man is a lier.