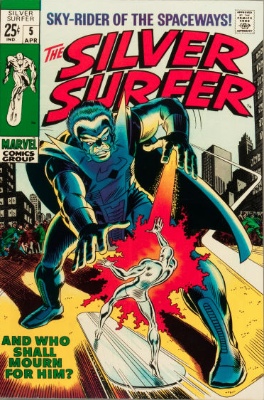 JavaScript must be enabled to use this site.

Please enable JavaScript in your browser and refresh the page. The next Weekly Auction will open for bidding Monday January Written by Stan Lee.

Art and cover by John Buscema and Joe Sinnott. Many years ago, in order to prevent the total annihilation of his civilization and homeworld, Norrin Radd bargained with the Devourer of Worlds.

However, on the fateful day he arrived on Earth, for love of humanity, he betrayed his master, and thus was cursed to never traverse the space-ways again. This is his story. Includes the Watcher back-up "The Wonder of the Watcher! Art by Gene Colan and Syd Shores. Exiled to planet Earth by his former master, Galactus, the Silver Surfer, a being empowered with the Power Cosmic itself, finds he cannot penetrate the invisible barrier which the Devourer of Worlds has encompassed the planet with.

However, this barrier does not prevent others from beyond the stars from coming to Earth and wrecking havoc. Thus, when a malevolent race of aliens descend upon the unsuspecting citizens of Earth, only the Silver Surfer possesses the power to stop them. Includes the Watcher back-up "The Coming of the Krills! Art by Gene Colan and Paul Reinman. The valiant Silver Surfer comes face-to-face with the sinister creature who would go on to become his greatest adversary and one of the greatest forces for evil in the Marvel Universe, Mephisto!

When the Lord of the Underworld kidnaps Shalla Bal, Norrin Radd has no choice but to venture into the stygian depths and face the devil himself to save the woman he loves.

Letter to the editor from comic writer Tony Isabella.

It's Thor vs. Art by Howard Purcell and Paul Reinman. Low distribution. And Who Shall Mourn for Him?! The Silver Surfer encounters a being of unimaginable cosmic power.

Can even the Sentinel of the Spaceways hope to defeat the enigmatic Stranger? Meanwhile, for the fate of many innocent lives, one man will make the ultimate sacrifice. Includes the Watcher back-up "Run, Roco, Run! Art by Howard Purcell and John Tartaglione. Letter to the editor from Wendy Pini Fletcher of Elfquest fame. Through an inexplicable occurrence, the Silver Surfer arrives in the far off future. 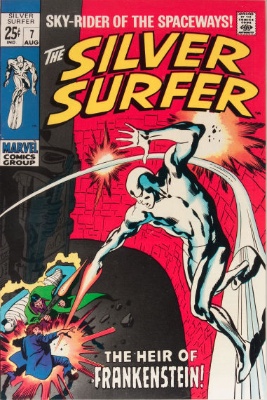 A future where the galaxy has been made a barren wasteland and what few patches of humanity remain alive life as slaves to the despot responsible for everything. In order to save the universe the Surfer must give up that which he has sought for so long - freedom! Includes the Watcher back-up "The Unsuspecting! Art by Syd Shores and Frank Brunner.

Cover by John John Buscema. When a madman clones the power of the Silver Surfer, the Sentinel of the Spaceways finds himself in mortal combat with a creatures who power rivals his own. Includes the Watcher back-up "I, the Gargoyle. Art by Howard Purcell and Dan Adkins.

Final page giant. First appearance of Marvel's Frankenstein. Art by John Buscema and Dan Adkins. Mephisto, the very embodiment of evil, sends a powerful emissary, The Flying Dutchman, to destroy his hated enemy, the Silver Surfer. To Steal the Soul of the Silver Surfer!

The embodiment of evil in the Marvel Universe, Mephisto, has sent a powerful force for evil to bring him the soul of the Silver Surfer. In an effort to better understand mankind, the Silver Surfer ventures among them, incognito. When a madman puts the Silver Surfer's true love's life in jeopardy, Norrin Radd does the only thing he can Can even the Silver Surfer hope to survive an encounter with the awesome might of the Abomination, a creature whose strength rivals that of the Incredible Hulk himself? 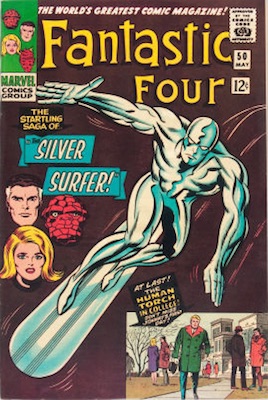 The ground rumbles and the citizens of New York City tremble in fear as the monstrosity known as the Doomsday Man rise from the bowels of the earth. Only the Silver Surfer, a being whom the people of Earth have ridiculed and alienated time and again, can save them now. Captain America cameo. Letters to the editor from comic writers Doug Moench and Alan Brennert.

Cover pencils by Marie Severin, inks by Joe Sinnott. The Flame and the Fury! Mephisto returns in "In the Hands of Mephisto! Letters to the editor from comic artist Geof Darrow and writer Alan Brennert. Brief Fantastic Four appearance.

Inks by Herb Trimpe. Cover by Herb Trimpe with possible layouts or pencils by Marie Severin. The Silver Surfer renounces his peaceful ways and decides to fight against mankind instead of with them! 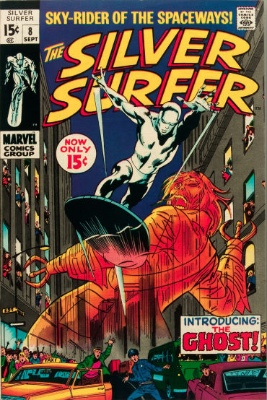 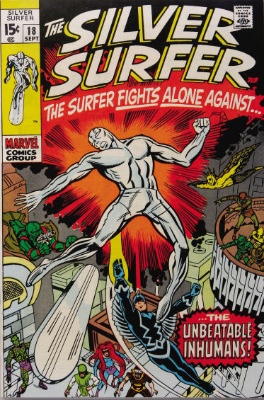